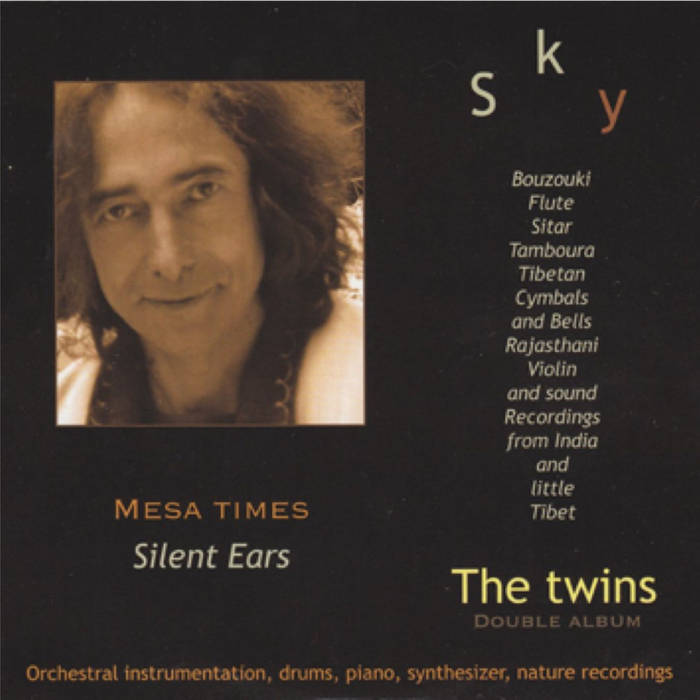 The Twins
The last album I had released was Union in 1999. Almost ten years past and I had recorded lots of songs. In winter 2008 I sat down and went through all of them, picking the crop. The only thing I needed now was to dust them up and fix unwanted artifacts like telephone ringing in the back of a recording. I found just such a software, especially for issues like that. In the summer my friend Marlene gave me her van so I could get away for a while and I went to Nederland, Colorado. For two weeks I sat in the van hooked up to an electric outlet and mastered the songs for The Twins. Ten years after I had recorded Silent ears at the same place.

The Twins Silent Ears
After I returned from a wonderful journey to India in 1997 I was happy like a kite but had no place to live. Where to now? You have heard about the musician without a girlfriend? I visited friends of mine in the Rockies and decided to stay. I found a place to live, high up and close to Nederland, Colorado. One of the most scenic places I had the fortune to live in. I fixed up a little studio and made it cozy and started to record. After a while the ceiling was leaking every time my room mate took a shower upstairs. It dripped an inch from the mixing board, lucky me. I had hours of soundscapes that I had brought back from India. When I was there I had a little portable DAT tape recorder with me and a good microphone as well. I recorded everything I could put my ears on. Once I passed by a tiny school and the children were singing the alphabet all in unison ever so sweet or at night I walked up to a snoring cow and put the microphone to her nose. There seem to be as many soundscapes to record as there are pictures to be taken. I recorded traffic, chanting sadhu, tea house conversations, a pond full of frogs at night, temples, a train ride; pretty much a kaleidoscope of soundscapes from all over India. First I had to choose the sounds that I wanted to use for Silent ears before I could record the bouzouki. I needed long clips so I chose the ones that I recorded during my stay in Auroville at the Bay of Bengal. When I started to record I played back the India soundtrack through the loud speakers and played the bouzouki to it. I was still in touch with India. I recorded once and then I added the sitar, harmonica and some other colors. When a long Colorado winter came to an end, I moved on, down the road to Santa Fe, New Mexico. I am still here. Silent ears, an impression of India set to bouzouki and sitar. Something different.

The Twins Mesa Times Time had passed. It was 2004 and I got back on my feet and I moved into a place where I actually could stand up straight with shoes on. I moved out of a little trailer, where I had to remove my shoes to do that. In my new home there were a couple of solar panels to make the electricity. Mesa Times is kind of a green recording. The cabin was close to nowhere removed from any influence, off the grid. Once a woodpecker flew down the stovepipe and I picked him up from the rafters and let him out. He shot out of my hands like an arrow and that was pretty much the news out there. I bought an old piano from the turn of the last century with ivory keys so nicked from the playing over time that you wonder what it all had heard. I was working and living in peace and quiet. For rent, I was working a couple of times a week at my neighbors horse ranch as a stable hand, and life was good and I was single. There was only one thing on my mind though, music. I started studying the piano in preparation for the symphony I wanted to write. Sometimes I would just sit at the keyboards and do something different and over the two years I had gathered enough material for a CD. On New Year 2006 I left the Mesa and moved to town. Mesa Times has something from a little